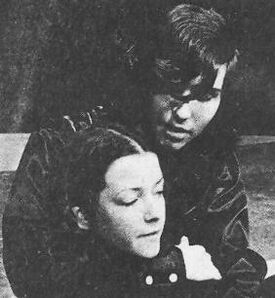 The Dream Engine was Jim Steinman's first musical theater work. It premiered in the spring of 1969, when Steinman was a senior at Amherst College.

Jacqueline Dillon of JimSteinman.com offers this synopsis: "During Jim Steinman's final year at Massachusetts' Amherst College, as fulfillment of an Independent Studies project, he conceived, wrote and scored a rock -n- roll musical called The Dream Engine. In the spring of 1969, Steinman starred in an explosive production of that piece which was staged, directed and choreographed by Barry Keating, who also electrified the role of the oracular Historian. The Dream Engine was met with a great deal of attention...both of the positive and negative variety. Joseph Papp, the innovative helmsman of The New York Shakespeare Festival, optioned immediately for professional rights to stage the work. The majority of the show's several thousand witnesses were aroused and intrigued. A few were unable to handle the power of the show's vigorous, unashamed and explicit content and protested the one aspect of the work that should have frightened and offended them least: the physical nakedness. Why wasn't it the terrifying way The Dream Engine exposes mankind on the inside that scared them? Or maybe it was? In any case, that five night, two weekend event simultaneously marked the end of Jim's college career and the beginning of a new one as a musical and theatrical vanguard. As theater The Dream Engine is highly illuminating, exceptionally poignant, extremely biting and, at times, extraordinarily humorous characteristics present in Steinman's entire body of work. Still, within the two acts of The Dream Engine, you'll find much more than just stylistic similarities to what Jim produced later. It's clear that The Dream Engine has fueled everything that has come after it and is also the foundation which Steinmania, and the philosophy associated with it, is built on. Here we see, in a raw and early incarnation, the special set of mind that makes Jim Steinman the kind of man and writer he is - a person capable of giving us, at the same time, a most vivid sense of the qualities of things and an equally compelling revelation of his own feelings. Profoundly and particularly in The Dream Engine, we experience the force of Steinman's conviction and his exaltation before things. Strip away from The Dream Engine the aspects that were influenced by the social climate of the day and you'll see that, as with all of Jim's art, it's inspired by his great hope for humanity and an urgent, irrepressible need to communicate that hope in an effort to educate our spirit, unloosen our feelings and prove to us that there can be a life after birth."

Joseph Papp, founder of the Public Theater and New York Shakespeare Festival, visited Amherst College in February 1969 to see a workshop of The Dream Engine (then titled Baal) and expressed interest in returning to see the premiere in the spring. However, after its successful spring 1969 production at Amherst, the show subsequently endured a series of setbacks. Steinman and Papp started planning the NYSF production of The Dream Engine in July 1969 with the intention of having it be the opening show at the newly-constructed Newman Theater in early 1970, but this was canceled because the theater did not suit the artistic demands of the work. In February 1970, Steinman auditioned songs from the show to Warner Records for a cast album, but they turned it down. In 1971, planning began to put on the show at the Arena Stage in Washington DC. Workshops began in early 1972 with Richard Gere as the star, but the final production was cancelled due to creative differences between Steinman and director Richard Pearlman. Steinman worked with producer Michael Kamen at the Hit Factory to record a demo tape of songs such as "Who Needs the Young?", "Train of Love", and "Heaven Can Wait" (the latter featuring Bette Midler on vocals), in hopes of attracting a new director. Among the prospects were Andre Gregory and Ken Russell. In early 1973, talks began to add famed rock singer David Bowie as the star. Unfortunately the new production never materialized, and Steinman and Papp turned their focus to More Than You Deserve. In 1974 Steinman rewrote The Dream Engine into Neverland, which held a workshop at the Kennedy Center in 1977.

On May 30 2019, as part of the Amherst College class of 1969 50th reunion, Barry Keating directed a 50th anniversary production of The Dream Engine, featuring a mix of original cast members and new talent. 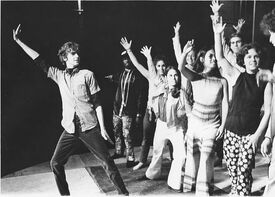 Special thanks to Professor Walter Boughton, Mrs. Evelyn Ward, Mike Kapinos and the members of the Independent Study Committee of Amherst College

Transcript and other information