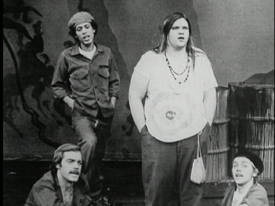 More Than You Deserve, originally titled The Vietnam Project and then Souvenirs, was a 1973 musical by Michael Weller (later famous for the screenplays of Hair and Ragtime) and Jim Steinman. It starred Fred Gwynne (perhaps most famous for his television role as Herman Munster in the sitcom The Munsters) and featured Meat Loaf.

Wikipedia offers this synopsis: "The story is set in a U.S. army base in Vietnam during the war. Major Michael Dillon (Gwynne), who is impotent, falls in love with a reporter sent to cover the camp, who turns out to be a nymphomaniac when she is gang-raped by the other soldiers in the camp. However, she realizes at the end that she will be even happier giving up her new-found lust for sex to settle down with the impotent commander."

Michael Weller was an American teenager in England who'd winged across the Atlantic with visions of becoming a composer and jazz pianist. As Weller put it, "All my childhood and formative daydreams were about composing like Bartok and playing piano like Bill Evans." As things turned out, he wound up in London trying to make a start in theater, with a graduate degree in drama from the University of Manchester under his belt, and an idea in his head.

During one of his visits to America, his father took him to see the musical Hair on Broadway. He didn't get the show. Weller says, "I asked my dad if this was supposed to be a portrait of what hippies were like. He said, 'It's a musical, Mike. Hair is to the hippies what South Pacific was to the Marines.'" This offhand comment was the germ of the idea Michael now had, an idea for a "satire based on South Pacific [...] a totally straight-faced 'tribute' type show in the style of Rodgers & Hammerstein, but the content of the musical was Vietnam instead of the South Pacific (gook ears, massacres, all handled with sunny, winking bonhomie), with a twisted love story at the center [...] a show that was poised, artful and deliberate, and which shocked an audience by its very restraint and control while presenting horrors," designed to "startle an audience into thinking about the war's horrors (or at least how far we had come as a nation since the innocent days of WWII)." At some point in the early Seventies, with this idea still in his head, director Kim Friedman paid him a visit in London, asking if he had any ideas for a musical, as Joe Papp had promised her a production at the Public Theater in New York. Not knowing who Friedman or the Public Theater were (as he put it, "Because I'd trained in music before I left America, I had absolutely no knowledge of or interest in New York theater [...] I didn't know the players, the scene, the gossip...nothing [...] my small theater lore was all centered on London, where I was living, working and establishing a career"), he still told her his idea in the vague hope of a potential production.

A few months later, Friedman informed Weller that Papp had approved a production based on nothing more than his belief in her - they had a show! Now all they needed was a composer. Weller was looking for "someone who could do a wicked parody of Rodgers & Hammerstein", and they saw several composers for the position, among them Michael Kamen of the New York Rock and Roll Ensemble. However, none proved satisfactory, and Kamen turned them down. Suddenly, Friedman came to Weller one day with a tape of a few songs by a potential composer, saying she'd found the man for the job. Says Weller, "She warned me that this music was different than what I had described, but she knew it was perfect for what was going on in theater at the moment." The composer? Jim Steinman. Weller's reaction? "I didn't know what to make of the music. It was operatic, expressive, dark, and interesting, but totally different than what I heard for the show. I like what Jim writes, but it didn't belong to my conception of the show." Regardless, Friedman persuaded Michael to sign Jim onto the project.

The show, titled Souvenirs, was booked for a run at the Public Theater. It was during auditions that rock and roll history was made when Meat Loaf and Jim Steinman met. Meat Loaf, accompanied by pianist Steve Margoshes, sang a song from his 1971 Motown album Stoney and Meatloaf entitled "(I'd Love to Be) As Heavy as Jesus." Loaf originally opted for a minor part, but after being impressed by his fevered audition, Steinman wanted him to sing a featured solo. According to Weller, "Jim insisted we find a way to use him in the show, since there was no part for him in what I had written. Jim had a song he wanted him to sing (I believe he had composed it before he had anything to do with my musical), so I wrote a scene into the play that sort of justified the moment - and by the time we opened downtown, the title of the show was changed to the title of Jim's song [More Than You Deserve]."

The show was initially staged in workshop form in April 1973. Meat Loaf described the original workshop thusly: "The first time we'd performed it, we did it with some wooden boxes and a table and an upright piano. [...] More Than You Deserve began as a play with a bit of music in it. One or two songs in both acts. [...] this weird black comedy." Weller, too, was surprised to find that "it seem[ed] to have had a peculiar appeal to a certain segment of the audience." With the workshop going well, Michael Weller's fears of losing the show he'd wanted to create were allayed, however temporary the feeling would prove to be.

When it came time for the actual production, however, the axis of creative power, for whatever reason, tilted in Steinman's direction. As Meat Loaf puts it, "Jim talked Michael Weller into turning it into a full-blown musical. It's not that the music wasn't any good, but Jim was trying to make it into something bigger than it was. [...] They brought in all these people, black gospel singers, dancers, a choreographer. It was insane." Indeed, many cooks were beginning to spoil the kitchen. Many of Weller's lyrics were getting the axe in favor of Jim's material, and an additional lyricist in Papp's employ, Ray Errol Fox, was being assigned to help Jim with them as well. Though ultimately Fox produced no results, and he and Jim collaborated on a different show instead, this was turning into a show that Weller did not want to be a part of, something that had spiraled further away from what he had intended it to be, due in no small part to the director, Kim Friedman. As he put it, "I had to trust a great deal to Kim's judgment. She was very young (right out of N.Y.U.), lively and ambitious, and a great great sales-person. What she was not was a good director. And she was (I now realize) frightened to death of what she'd taken on, knowing at some level she was unqualified to deal with it. [...] by that time I had distanced myself from the whole thing as far as possible. [...] I had moved on to other plays, and felt it best to leave the experience behind me."

By the time the show opened in November 1973, on opening night, Weller had no idea what to expect. What he saw was less than brilliant in his eyes. "It was a painful show to watch. [...] Others walked out with comments like 'This is the worst show I've ever seen,' 'Who allowed such a disgusting play to get on stage,' and so on. [...] I was crushed that my original concept had gone so far astray. We ended up with something funky, weird, slapdash, and by turns appealing and repellent..." Even more insulting, ticket sales were good enough that Papp approached him with an offer he wanted no part of. Says Weller, "When the play was about to close at the Public Theatre, Papp called me to his office and suggested that he might re-mount it uptown at Lincoln Center, which he had just taken over. I told him I wouldn't allow such a thing to happen under any circumstances - if the show was to be done again, it would have to be as I had envisioned it both stylistically and musically. I explored possible legal remedies to do with 'separation of rights' [...]"

"If Only" was cut from later performances.

Additional songs in drafts but not in final production: 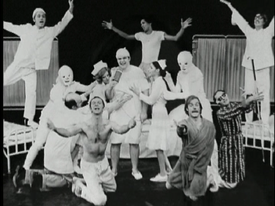 Special Thanks to the New York Telephone Co. and Bellevue Hospital Center


On closing night (Jan. 13, 1974), Collins assumed the role of Dillon for the evening performance after Gwynne was called away to film a television commercial.

Retrieved from "https://jimsteinman.fandom.com/wiki/More_Than_You_Deserve_(musical)?oldid=5447"
Community content is available under CC-BY-SA unless otherwise noted.