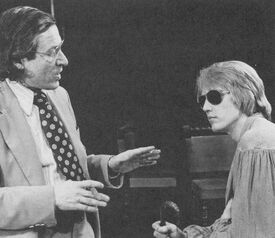 Kid Champion is a musical starring Christopher Walken that was put on in 1975 as part of the New York Shakespeare Festival. The book, set in late 1969 to spring 1970, was written by Thomas Babe. Music and lyrics were by Jim Steinman, with Babe contributing additional lyrics. It was directed by John Pasquin. The music was conducted by Steve Margoshes.

Doollee.com offers this synopsis: "Charismatic, dazzling and attractive to both sexes, Kid Champion has achieved the pinnacle of success as a rock star. He is surrounded by an entourage of groupies, press agents, would-be biographers and adoring fans-all of whom seek to share in the glittering excitement of his almost frightening notoriety. But even as the play captures the aura of this high-powered world, it also exposes the emotional and intellectual complexities of its title character, and the uncertainties, faced by a gifted, attractive kid from Kansas who is skyrocketed to sudden wealth and fame, and eroded by the drink, drugs, and messianic power which are so much a part of the rock scene. Inevitably, as pressures mount, there is tragedy and sudden decline, and the sense that all the beauty and ugliness of the 60s have been compressed into one brief, but remarkable, lifetime."

According to Babe, the title "Kid Champion" was inspired by a children's television character named Kid Galahad. 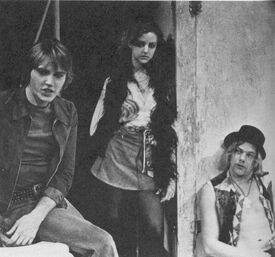 The above information pertains to the 1975 production. There was also a 1979 production presented by Rock'N'Rep in New York City. It was revised and directed by Thomas Babe himself, and is the version published by Dramatists Play Service. The setting was designed by Mike Boak, the lighting was by Arden Fingerhut, costumes were by Bob Wojewodski, photographs and effects were by Daniel Clark, and the production stage manager was Renee F. Lutz.

Retrieved from "https://jimsteinman.fandom.com/wiki/Kid_Champion?oldid=5559"
Community content is available under CC-BY-SA unless otherwise noted.