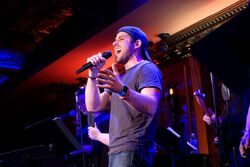 Josh Young is an American stage actor. Young had performed in several shows in the Stratford Festival, including The Grapes of Wrath (Connie), Evita (Che), and Kiss Me Kate (Paul). For his role as Che in Evita, he won the Broadway World Toronto Award for Best Actor in a Musical. He also played Marius in a tour of Les Misérables. Young was raised in Wallingford, Pennsylvania, and his family is Conservative Jewish. He trained at the Pennsylvania Governors School for the Arts and holds a B.F.A. in Musical Theatre from Syracuse University. Young played the role of Judas in the revival of Jesus Christ Superstar from 2011-2012, for which he was nominated for the Tony Award for Best Featured Actor in a Musical. On May 8, Young won the Theatre World Award for an outstanding Broadway debut performance.

In 2015 he starred in the musical Amazing Grace on Broadway in the role of John Newton.

Retrieved from "https://jimsteinman.fandom.com/wiki/Josh_Young?oldid=4935"
Community content is available under CC-BY-SA unless otherwise noted.