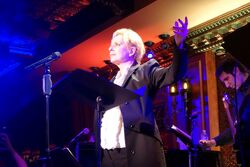 Ellen Foley (born June 5, 1951) is an American singer and actress who has appeared on Broadway (Into the Woods) and television (Night Court). In music, she has released four solo albums but is best known for her collaborations with rock singer Meat Loaf. The Clash's hit song "Should I Stay or Should I Go" was written about her.

Retrieved from "https://jimsteinman.fandom.com/wiki/Ellen_Foley?oldid=4941"
Community content is available under CC-BY-SA unless otherwise noted.