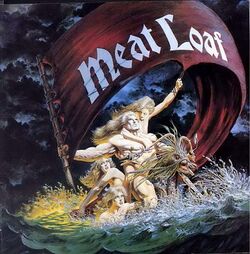 In 1981, after losing his voice, Meat Loaf released Dead Ringer, an album of songs by Jim Steinman. Although he wrote all the material, Steinman did not have much direct involvement in the making of this album, having released his own album, Bad for Good, the same year.

As Meat Loaf began recovering from a time period filled with drugs, exhaustion, and loss of his voice, to say nothing of a role in a movie called Roadie and some time playing softball, he returned to work with Jim Steinman on the follow-up to Bat Out of Hell that the record label had been pressuring them to make since 1978. Steinman had been at work in the studio with Roy Bittan and Todd Rundgren assembling the album so that all Meat Loaf had to do was sing his lead tracks and be done with it, hoping for as stress-free a process as possible following his breakdown. Imagine Jim's surprise when Meat told him that he couldn't bear to deal with any of the songs they'd been recording because they reminded him too much of a bad time in his life, and walked out on the album! Jim was left to finish Bad for Good himself and release it as a solo project, exacerbating tensions that had already been growing between the duo for some time.

When the label reminded Jim and Meat that an album was still to be made, though at this point it would be to fulfill the terms of their contract as quickly as possible so they could dump the foundering team, Jim got to work. He wrote five new songs, which (in addition to the track "More Than You Deserve," which Meat Loaf had sung in the musical of the same name, and a reworked monologue) formed the album to be made. It went through several titles, including Everything is Permitted, Rock and Roll Dreams Come Through (after a track that later went onto Jim's album instead), and I'll Kill You If You Don't Come Back before the last-minute song change just mentioned gave birth to the title Dead Ringer.

In late 1980, Steinman and Jimmy Iovine went into the studio with Meat Loaf to begin work on the new album. As Meat Loaf's voice continued going through recovery stages, they assembled the rest of the album (just like last time) and got it in the can. All of the backing tracks were completed with Steinman and Iovine as producers. Steinman and Roy Bittan arranged the tracks, with Alden Shuman and Roy Straigis providing string arrangements. Tom Malone provided horn arrangements on the last-minute replacement track, "Dead Ringer for Love."

After completing sessions for two of the tracks, "Read 'Em and Weep" and "Dead Ringer for Love" (which featured a guest appearance from Cher), completely under the guidance of Steinman and Iovine, both producers agreed by mutual consent to leave the project because neither of them could get Meat Loaf to sing, just like neither of them wanted the unenviable task of assembling a working vocal track for each song from hours and hours of tape. Undeterred and needing to release the follow-up, Stephan Galfas (who had previously worked with Meat Loaf in the late Seventies on the track "Keeper Keep Us" from the InterGalactic Touring Band's self-titled album) was called in to co-produce the remaining vocal tracks with Meat Loaf.

Four singles were released from Dead Ringer: "Dead Ringer for Love" (featuring Cher, which went to #5 in the UK and stayed in the charts for a surprising 19 weeks), "I'm Gonna Love Her for Both of Us," "Read 'Em and Weep," and "Peel Out." The album reached #1 in the UK. In spite of this, however, the album was not to meet with mainstream success, as its release date unfortunately coincided with Black Friday in 1981. An enormous amount of workers at the record company had been laid off, which cast the album in the unfortunate light of "damaged goods," from which it never quite recovered.

Retrieved from "https://jimsteinman.fandom.com/wiki/Dead_Ringer?oldid=4567"
Community content is available under CC-BY-SA unless otherwise noted.