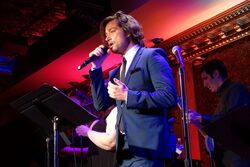 Constantine James Maroulis (born September 17, 1975) is an American actor and rock singer from Wyckoff, New Jersey. He was the sixth-place finalist on the fourth season of the reality television series American Idol, and received a nomination for the Tony Award for Best Performance by a Leading Actor in a Musical for his role in Rock of Ages. He starred in the title role in Jekyll and Hyde on Broadway, for which he received a Drama League Award Nomination for a Distinguished Performance Award.

Retrieved from "https://jimsteinman.fandom.com/wiki/Constantine_Maroulis?oldid=4943"
Community content is available under CC-BY-SA unless otherwise noted.