Bat Out of Hell (musical) 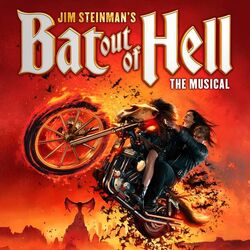 Bat Out of Hell is a musical with book, music and lyrics by Jim Steinman.

After several years of pre-production, a developmental lab was held in November 2015 in New York City.

Two of the producers, the director, musical director, and only one member of the cast - Andrew Polec (Strat) were retained as the show headed for England.

The first promotional launch events for the show were in November 2016, in London and Manchester, and a prolonged rehearsal period went underway.

The show premiered at the Manchester Opera House in Manchester, England in February 2017, and was followed by limited runs in London (June 2017) and Toronto (October 2017).

Despite the development of this musical taking place in the UK, Jim Steinman has been heavily involved in the creative process for the show. In multiple interviews, the cast have mentioned that he's constantly watching and giving feedback via Skype, on a daily basis, and speaks with the director for hours on the phone. Also, longtime collaborator Barry Keating has been working on the project as Creative Consultant - relaying information from Jim, filming rehearsals to send to Jim, and keeping things on track with his vision.

In 1968, Jim Steinman wrote a musical in college called Baal, based on Bertolt Brecht's first play - also titled "Baal". The following year, ideas from that musical had progressed into a musical called The Dream Engine. It was about a young man named Baal, and he led a tribe of wild young people, they lured and enticed a girl into joining the tribe, and there are two main villains in the story - a couple called Max and Emily (presumably a nod to Mech and Emilie from Brecht's Baal). It was a very political piece, in protest about contemporary issues, especially that the older generation were drafting their youth to fight and die in the Vietnam war. Youth rebellion was a major theme. The song Who Needs The Young originates in this play, as do some spoken word segments, such as Hot Summer Night and I've Been Dreaming Up A Storm Lately, which are also present in Bat Out Of Hell The Musical.

In 1977, Jim Steinman's musical Neverland was in workshop, where The Dream Engine had morphed to be less political, and more Peter Pan oriented. It was now set in the future, in the dystopian city of Obsidian, Baal now led Lost Boys, and rescued Wendy from her parents Max and Emily.

Many of the songs in Neverland were also in the album Bat Out Of Hell, performed by Meat Loaf. While touring with Meat Loaf for the album during the late 1970s, Jim Steinman would perform his spoken word piece Love and Death and an American Guitar, which is now used to open Bat Out Of Hell The Musical. He would also perform Hot Summer Night, as on the album.

The song Bad For Good from Jim Steinman's 1981 album of the same name and its accompanying music video depict what could be considered a prototype of Raven's bedroom scene from Bat Out Of Hell The Musical.

The location "The Deep End" can be seen in the 1986 music video for the song "If You Were A Woman (And I Was A Man)" on the Bonnie Tyler album Secret Dreams and Forbidden Fire, which Jim Steinman produced. He came up with the concept and co-directed the music video.

Jim Steinman's ongoing musical project has transformed into Bat Out Of Hell The Musical. We have Strat instead of Baal. We have Raven instead of Wendy. We have Falco and Sloane instead of Max and Emily.

The character Strat often wears a shirt depicting Jim Steinman as Baal in The Dream Engine (1969) as a nod to the roots of this show.

Bat Out of Hell held a developmental lab at Pearl Studios from November 2 to November 24 2015.

Bat Out of Hell completed an extended run in previews at the Manchester Opera House from February 17 to April 29 2017.

Bat Out of Hell ran at the Ed Mirvish theatre in Toronto, Canada from October 14 to January 7, 2018.

A US Tour of the show was planned to take place starting late 2018 to mid 2019. The Tour was cancelled a few days before the end of the first date in Toronto, and did not continue to the other stops.

A production of the show ran from November 2, 2018 - September 19, 2019 in Oberhausen, Germany. The show, including it's songs, were translated into german for this proudction.

A 6 week engagement of the show, from August 1 - September 8, 2019 at New York City Center theater was announced. Featuring cast members from the original UK production, as well as the aborted US Tour.

A new production of the show was announced for a series of dates at Hard Rock Cafe Hotels in America between March and April 2020. The show was then due to move on to a series of one night only arena shows in Australia in May 2020, before moving on to a UK Tour beginning September 2020.

The Australia dates and many of the UK dates have been rescheduled due to the COVID-19 pandemic. The America dates did not go ahead, and currently no new dates have been announced.

See Bat Out Of Hell The Musical : Original Cast Recording for details.

During the 2020-2022 UK Tour, Good Girls Go To Heaven was performed as an encore at certain performances.

For casting, please visit the wiki pages for the individual runs of the show. If you'd like more information on characters in the show, please visit one of the links below: