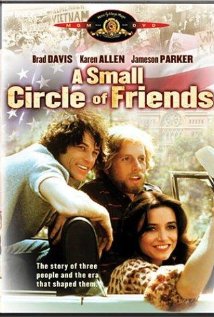 A Small Circle of Friends is a film released in 1980 by United Artists. Directed by Rob Cohen, it stars (among others) Brad Davis, Karen Allen and Jameson Parker. The film takes place at Harvard in the 1960s, during a time of social upheaval and student unrest. Three students (played by Davis, Allen and Parker) bond together, challenge the system, begin to lose their ideals, and take their relationship to a new level. Director Cohen and screenwriter Ezra Sacks actually attended Harvard University, where the film takes place.

The title is an allusion to the Phil Ochs song "Outside of a Small Circle of Friends," the first verse of which is:

"Look outside the window,
There's a woman being grabbed
They've dragged her to the bushes
And now she's being stabbed
Maybe we should call the cops
And try to stop the pain
But Monopoly is so much fun,
I'd hate to blow the game
And I'm sure it wouldn't interest anybody
Outside of a small circle of friends."

John Korty was originally chosen to direct the film, but backed out of the project at the last minute. Rob Cohen pleaded with UA for directing rights. UA were naturally reluctant to offer Cohen the position because he was mostly known in Hollywood as a producer, but he kept pressing the already hard-pressed studio, and after six weeks of deliberation (unaware of the Heaven's Gate fiasco ahead of them), Cohen was told he could have the job as long as he named a back-up director in the event that he would be fired from directing. Arthur Hiller agreed to step up in the event that this happened. Luckily for Cohen, it never did happen.

After some filming was accomplished in and around Harvard (including sequences featuring David Hollander, real-life editor of the Harvard Crimson at the time, as himself), the higher-ups at the college finally learned more about the film's plot and barred the crew from filming in Harvard Yard, which necessitated, for example, filming the "Harvard" riot scene at Bridgewater State College (the students for the riot scene were recruited from Bridgewater's varsity sports teams and announcements on Boston radio stations) and filming the sequences at the "Harvard" dining hall at the Cafeteria in the Walker Memorial Building at Massachusetts Institute of Technology (MIT). However, though the film crew had been barred, Harvard alumnus Cohen found ways to sneak his crew in to get the remaining shots they needed.

Other restraints in the budgetary department necessitated cameos from the director (who appears as a student sitting next to Karen Allen in the crowded lecture hall) and his sister, a soprano trained in opera, who appears singing a portion of the score at the midway point when Nick leaves Jessica following his fight with Leo.

Jim Steinman wrote the score for the film. The music was orchestrated and arranged by frequent Steinman collaborator Steve Margoshes, whose solo piano work is also heard on the film's soundtrack. Some of the melodies would be reused in later songs.

Retrieved from "https://jimsteinman.fandom.com/wiki/A_Small_Circle_of_Friends?oldid=4554"
Community content is available under CC-BY-SA unless otherwise noted.