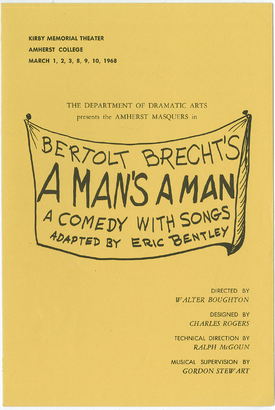 "Jim Steinman wrote the score for an exciting version of Bertolt Brecht's "A Man's A Man" that was done by the Amherst Masquers, and which featured a show-stopping performance by Sarah Harris, a Smith student, singing a song called 'Ganges River' (which was later recycled into "The Dream Engine" as 'Mother River')." --Stephen Collins

In a review for the Amherst Student newspaper, Fred B. D'Agostino called A Man's a Man "probably the most daring and fascinating theater I have seen in last four years here" with "a stunning, schizoid, and evocative score."

The place: India?
The time: Yesterday, today and probably, God help us, tomorrow 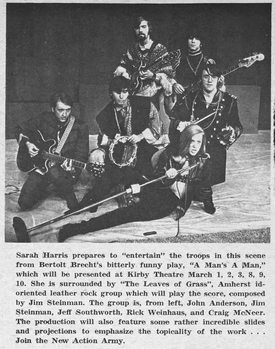 Special thanks to Mr. Oliver M. Knode and Kappa Theta for the loan of properties.

Descriptions are taken from a review by Robert S. Nathan in the Amherst Student newspaper, March 7 1968.

"A Man's a Man" begins with a frenetic Broadway-style fanfare played by "The Leaves of Grass," an Amherst rock band called "five magnificent musical clowns" by the Springfield Daily News. It is followed by John Anderson playing a harmonica solo, a series of chord variations reminiscent of the Vanilla Fudge's "You Keep Me Hanging On," Jim Steinman singing part of a rock-oratorio, "Mr. Blue," a crowd-rousing erotic drum solo by Craig McNeer, and an abrupt finish with a circus calliope sound. The overture is varied and aggressive; it sets the tone of the music which helps make an otherwise good play into a hypnotic evening of dynamic entertainment.

At first, we get a driving vocal by Jim Steinman of "Is There Anybody Here?" The soldiers are brought from the audience with great glee. The music counters this with the drama and passion of Steinman's singing. Throughout the play, the music is to serve this function frequently: the creation of conflicting moods.

An adapted, mocked "Ballad of the Green Berets" follows. The power of the soldiers' voices, the hard guitar of Jeffrey Southworth, and the bitterness of the lyrics are emotionally disturbing as a total force.

By the time an adapted version of Phil Och's "Cops of the World" rolls around a little later, the anti-war theme has been driven home. The unrelenting bass guitar, superbly played by Rick Weinhaus, is at times more moving than Och's own version. The song is sheer instrumental and vocal power.

But the "Leaves" have just begun to fight. Sarah Harris appears next singing "The Song of the Travelling Bar." Miss Harris gyrates constantly to the smoky rhythm, doing little else to put the song across. I can't compare her to Lotte Lenya, as did the Springfield Daily News, but her voice is right in place. The music is mellow, Steinman on organ creating a Nina Simone-type arrangement. Again the driving beat, the smooth music. Again the contrast between lyrics and music.

Then, at the end of the scene, the best number in the show, "The Song of the Ganges River." A simply beautiful song. Beginning with a cheerily snide introduction sung by Miss Harris, the music gets louder, there is a break, and suddenly a switch. All hell breaks loose as Miss Harris begins to belt: "Take a look at the Ganges River..." I felt like standing up and yelling "Bravo!!" even though the occasion wasn't quite right. Miss Harris displays the best of her vocal equipment and pours out the theme a second time, displaying talent we knew was there, but hadn't yet seen. The number is emotional rape; it is enthralling.

Throughout the rest of the play, the theme "A Man's a Man" recurs frequently sung by different characters. There's a Motown version with Sarah Harris and her women-for-hire as the back-up group, a 1956 rock version complete with falsetto "doo-bee-doos" by Laurie Alberts and bass "doo-wahs" by Drew Kalter, and an Everly Brothers duet by Hugh Lawrence and Toby Webb. The theme is also done by Brock Putnam and Craig Dunkerley in bolero style, a strip number by Widow Begbick's girls, and a drunken version by Bill Hart. Webb and Lawrence were great, Begbick's girls were terrible, and the Kalter-Alberts satire was excellent. By the end of the play, however, the theme has been heard so often it begins to wear thin.

David Stewart's voice is an absolute pleasure, later in the second act. His "Song of the Both," one of the highlights of the evening, is sung to the tune of, yes, it's for real, the early 50's Chordettes' hit "Mr. Sandman (Bring Me a Dream)." The lyrics are vaguely unbelievable, but Stewart manages to make them sound reasonable, and the music is fine. He is excellent, doing one of the best jobs of using more than just a voice to project a song.

The final number would warm David Merrick's heart. The entire cast lines up as Stewart sings a new introduction to the "Recruiting Song," from the opening of the play, and they all join in singing the new "Green Berets," kicking their legs in a Ziegfield chorus line. Hysterical, and yet not so funny. The song is not a happy one, and yet there are thirty people singing it like it was the Meredith Wilson dexedrinal song of all times. Again the contrast. Again the harshness.

Retrieved from "https://jimsteinman.fandom.com/wiki/A_Man%27s_a_Man?oldid=5522"
Community content is available under CC-BY-SA unless otherwise noted.